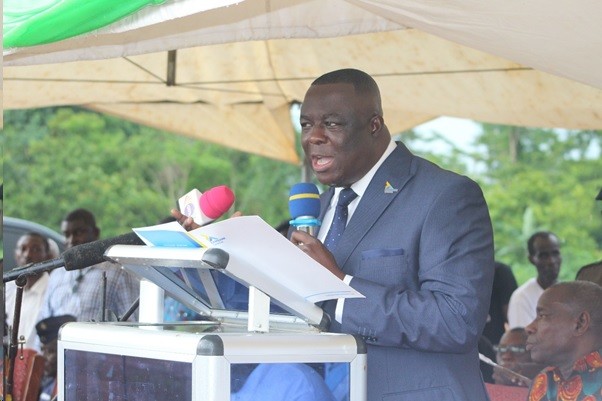 The Chief Executive Officer of the Ghana EXIM BANK, Mr. Lawrence Agyinsam, has indicated that GEXIM is on course to deliver on its mandate to establish its planned construction of Legacy Projects approved by the Board.

He made this statement when he addressed the official launch of the Akuapim Gold Agro Processing Ltd, a 1D1F GEXIM-funded project at Nkronso in the Eastern Region on Monday, 20th May, 2019.

Mr. Agyinsam said five Legacy Projects will be supported to boost the economy of Ghana.

He said the Akuapim Gold Processing Ltd. is one of the Legacy Projects and involves the establishment of plantations, Out-grower schemes and the construction of a State-of-the-Art Factory at Nkronso.

The CEO said one of the key focus areas of the Bank is to support the 1D1F initiative, which seek to transform Ghana’s economy into an export-led one to drive sustainable development in Ghana.

At a well-organised and attended Launch of the Project, Mr. Lawrence Agyinsam shared with the august gathering that, Non-Traditional Export Commodities has been a major source of foreign exchange and has recorded consistent revenue growth over the years. “Statistics indicate that the sub-sector’s contribution to the overall export revenue basket is expected to reach 45% if give the the needed support.

The CEO said that, in pursuance of the Bank’s mandate, the GEXIM has resolved to support the private sector to strengthen the production and export chains of the marked priority commodities as well as diversify and expand the sector scope to include, the development of raw material bases and efficient value chains for new innovative high earning commodities such as Avocado, Herbs, Spices, Coconut, amongst others.

In actualising its Priority projects, Mr. Agyinsam intimated that , the Akwapim Gold Avocado Processing Project is one of the first set of innovative programmes Ghana EXIM BANK is supporting and he was hopeful that its objectives would be achieved.

“Distinguished Ladies and Gentlemen, GEXIM aims to create over One million jobs, equitably spread across the country; increase Non-Traditional Exports by 90 percent and create new value chains for agricultural products through the 1D1F. It is reassuring that, the Akwapim Gold Project will engage over 1000 Out-growers over the life-cycle of this ambitious project”.

The Project involves the cultivation; production and processing of hybrid Avocado Pear for export, in addition to the construction of the State-of-the-Art Processing Factory.

Cultivation of large-scale acres of land for the production of the product is expected to be undertaking at Asafo and Begoro under the first phase of this Legacy Project.

Okyehene Osagyefo Amoatia Ofori Panin chaired the Event. He expressed his Paramountcy’s appreciation and gratitude to H.E. Nana Addo Dankwa Akufo-Addo, The President of the Republic for fulfilling his promise under the 1D1F Program and pledged his total support towards the successful implementation of the Project.